What Self-Discovery Path Should You Start This Year?
Take the Quiz

A Remarkable Story of Perseverance, Friendship, and a Really Crazy Adventure
Jake Steinfeld
Be the first to review this product
Audio Download $29.95
Regular Price $29.95 HayHouse.com.au $14.98 (save 50%)
Available
Add to Wish List Facebook Twitter Email
Skip to the end of the images gallery 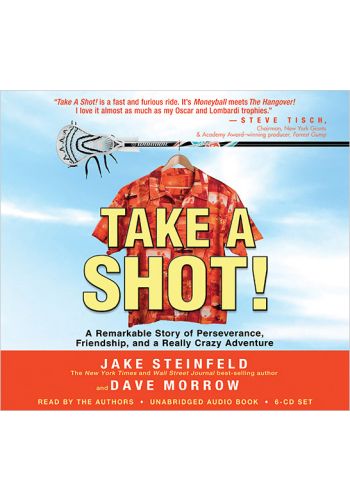 Skip to the beginning of the images gallery

Take a Shot! is the incredible true story of how three unlikely partners-world-famous fitness icon Jake Steinfeld, former Princeton University lacrosse star Dave Morrow, and son of a TV preacher Tim Robertson-broke all the rules and beat all the odds to create Major League Lacrosse.

This audiobook will take you on a roller-coaster ride through the ups and downs of starting a business-and not...See more

Take a Shot! is the incredible true story of how three unlikely partners-world-famous fitness icon Jake Steinfeld, former Princeton University lacrosse star Dave Morrow, and son of a TV preacher Tim Robertson-broke all the rules and beat all the odds to create Major League Lacrosse.

This audiobook will take you on a roller-coaster ride through the ups and downs of starting a business-and not just any business, but a professional sports league built around America's oldest and most tradition-bound game. Today, Major League Lacrosse is entering its 12th season, and the sport has exploded into the fastest-growing game in the U.S. But it wasn't always that way . . . not even close. For four crazy, chaotic years, from 1998 to 2001, Jake, Dave, and Tim faced enormous obstacles and endless challenges in their lonely battle to make their lacrosse dream come true.

From the earliest inspiration-Jake's chance reading of a magazine article that got the ball rolling-to the wild search for investors and owners, to the insane setbacks that nearly derailed the league time and time again, to the emotional and triumphant debut of Major League Lacrosse, Take a Shot! is an action-packed, thrill-a-minute adventure story.

But this book is also about friendship under fire. It tells the tale of three men from vastly different worlds-Jake, the brash Hollywood icon and driving force behind Major League Lacrosse; Dave, a shy Ivy Leaguer from blue-collar Detroit and the ultimate fish out of water; and Tim, the son of TV evangelist Pat Robertson and a multimedia mogul-who teamed up to try the impossible: start a professional sports league from scratch at a time when other leagues were crashing and burning around them.
When Jake recruited Dave to be his partner, neither had any idea what was in store for them, nor what it took to start something like this (after all, who does?). But they had something more important: a gut instinct that, from day one, they could always trust each other. And so, with only a handshake, they ignored all the naysayers who warned them that they were doomed to fail and together built Major League Lacrosse, weathering every crisis and shrugging off each disaster along the way. And in the process, their partnership evolved into an enduring friendship, as Jake helped Dave blossom into a big-time entrepreneur, and Dave-at a crucial moment with everything on the line-came out of his shell and justified Jake's relentless faith in him.

"Take a Shot! is a fast and furious ride. It's Moneyball meets The Hangover! I love it almost as much as my Oscar and Lombardi Trophies."
- Steve Tisch, Chairman, New York Giants & Academy Award-winning producer, Forrest Gump
"Insightful, funny, and full of great anecdotes, Take a Shot! is a roller-coaster ride of a story. Jake reminds me of Indiana Jones, never giving up until he reaches his goal."
- Frank Marshall, Academy Award-winning filmmaker
"Just like my start-up experience at ESPN and the NFL, Take a Shot! captures the humor and drive it takes to success against all odds."
-Steve Bornstein, EVP of Media, NFL & President/CEO of the NFL Network
"The book is fast paced and exciting. Jake's tenacity is an inspiration to any entrepreneur, whatever the field. And to think that this is only the beginning for Major League Lacrosse is amazing. Could it be the next NFL? With Jake and Dave at the helm, nothing would surprise me."
- Doug Ellin, creator and executive producer of HBO's Entourage